Fundraising for 2020/2021: Currently at $1431. Fundraising has begun, see the global post for options. Paypal Donation Links US dollars CDN Dollars

Isgrimnur wrote: ↑
Wed Mar 04, 2020 10:33 pm
I honestly don't have a memory trained to remember hands, or hell, even pay attention to position half the time.

I worry that my lack of strong hand memory affects my ability for improvement (you hear of professionals with hand-recall for events against specific opponents years earlier). However, with additional experience comes somewhat stronger recall abilities. I do better in "staging" each hand in my mind before it is in play (especially important in no-limit events to know likely opponents and chips situations). Taking a conscious moment to consider your position relative to players at extreme ends of skill levels (folks you want to play with and folks you want to avoid) can help you avoid pitfalls and avoid missing out on opportunities for good things to happen.


The highlight that sticks with me is a hand I wasn't in. A married couple were at the table. Husband had wandered off, and she went to a showdown with a new arrival wearing a FC Barcelona shirt. She hit her diamond flush draw, Ace on the board, Queen in her hand.

He had the King. She was not a happy camper and took a walk for a bit before returning.

Getting up from the table when things unexpectedly don't go your way is a sign of a player who knows how to mitigate tilt. Getting tilted with a second-best flush is not the sign of a super-experienced player. Still, fun to see stuff like this happen at your table, as it can open up opportunities for you down the road. Thanks for sharing.
2 + 2 = 5
Top

So our live games have come to a rapid halt (I've got a -$5 night from earlier this month and that's it). However, MHS and I have been (as she calls it) Online Poker in the Time of Cholera. We're coordinating things on Discord, so if anyone is interested in a server invite, hit me up.

The opposition would be fairly poker savvy, but very challenged by online technology. Tournaments seem to be starting around 6pm Mountain Time (during the week) with an anticipated tournament start time of 4pm this Saturday. There's also other shenanigans going on during the day, but nothing nearly as coordinated as our tournaments. 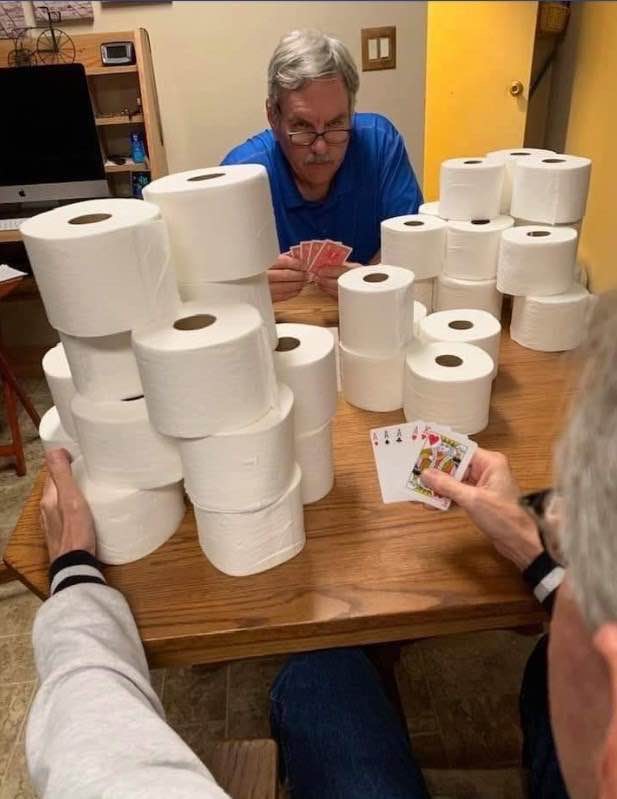 The Meal wrote: ↑
Mon Mar 16, 2020 3:16 pm
So our live games have come to a rapid halt (I've got a -$5 night from earlier this month and that's it). However, MHS and I have been (as she calls it) Online Poker in the Time of Cholera. We're coordinating things on Discord, so if anyone is interested in a server invite, hit me up.

The opposition would be fairly poker savvy, but very challenged by online technology. Tournaments seem to be starting around 6pm Mountain Time (during the week) with an anticipated tournament start time of 4pm this Saturday. There's also other shenanigans going on during the day, but nothing nearly as coordinated as our tournaments.

We're now into our sixth month of only playing online tournaments with friends. The majority of tournaments we've set up are free games, but a couple of nights a week there's a smaller group of us who've been playing for-money games and squaring up with each other. Between the games we've coordinated and a slightly different friend group who's run something similar (in which we've only participated), I've played in 45 for-money tournaments (and have attended 85-90% of all events). Since we're playing so much more frequently, stakes have been reduced ($20 tournaments for the games we coordinate, $10 tournaments for the other group), and for the most part folks are finding things palatable.

Since online games are run by computers and the computer can handle the mechanical structure so much more quickly and error-free compared to playing these things live, we've branched out significantly into the types of games we've played. The meaningful break down of types of poker tournaments we've played in fall into four categories: Hold'em, Omaha Hi/Lo, HORSE, and Everything Else:

A few of those tournament types are identified as "mixed games" which means after a certain interval (which is generally 10 or 15 minutes for our online games) the game type changes. For instance in a H.O.R.S.E. mixed game, the games rotate between Hold'em, Omaha Hi/Lo, Razz, 7-card Stud, and 7-card Stud Hi/Lo. (H.O.S.E. is the same thing, but without the Razz, as some players really don't enjoy that game.) The computer is much more efficient of keeping track of games, keeping track of ensuring the proper winners in game types we don't play as frequently, doing rote things such as breaking up pots for winners in the split-pot games and we're playing many nights of the week, so it's really good to break up the monotony that we have alternatives to Hold'em available to us. "Our group" of players has about two-dozen active participants, and the side group we're involved in has about a dozen.

After starting out slowly (punting on each of my first 4 $20 tournaments, and then my first $10 entry), I've made a bit of a come-back, results-wise: 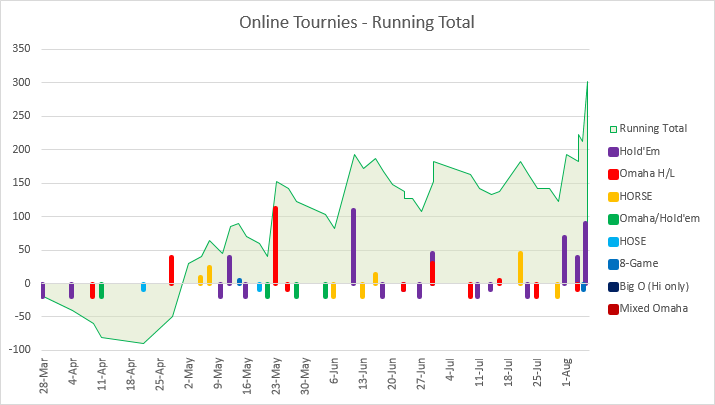 The vast majority of results see me losing the buy-in of the tournament, but overall I've averaged +$6.72 over these 45 events. I've averaged better results in some game types (+$13.44 per Hold'em; +$8.86 per Omaha H/L, +$4.38 per HORSE) while I average losing results in other types (-$20.00 per mixed Hold'em/Omaha event, -$10.00 per HOSE, -$2.50 per 8-game mix) which admittedly are of a smaller sample size. I'm far from the big winner in our games, but between MHS and myself we've absolutely cleaned up in the games which are being organized by our friend.

It's pretty wild to see how playing online affects the results for individual players in our group. Some players who are consistent donators in the live environment play a lot more boldly (and, IMO, correctly) when playing online. Others are absolutely "just clicking buttons" online (which has a negative connotation, implying that they're not taking appropriate strategic considerations before taking an action) while they do very well in the live environment. It's also absolutely wild how the "common bet customs" change between the two environments. Playing in a live tournament we probably see about 1/3rd as many hands in a given amount of time (or even less!) compared to running things online, and that has the effect of making online betting (at least for the more savvy players) smaller as you can be both a bit more risk averse (which is a major tournament consideration) and push edges better when you're seeing so many more hands.

As far as the mechanics of playing together for money, but from our separate homes, there is a lot of trust involved. MHS and I both video stream our games from separate rooms in the house (we coordinate on Discord for our games, in a mandatory Zoom conference call in the other games), but that wouldn't necessarily prevent us from texting each other our hole cards or doing other shenanigans that'd violate the spirit of the game. That's another reason why we've settled on a smaller buy-in/pay-out scale for the whole endeavor, and also has a lot to do with how we've controlled the participant list for our for-money games (we all know each other and are a friendly bunch).

It's also fun to see how and which players are reacting to having their wins and losses more "in your face" in the online environment. I don't want to get into the details of how the winnings and buy-ins are being handled, but its fair to say that there's a different sort of reckoning than just showing up at someone's house once a month and pulling a few $20s out of your purse. Some players who've been pretty blase about live performance are clearly using safer-at-home free time to work on the strategic elements of their poker games, which makes for a terrific dynamic. If we ever do proceed past the end-of-times and get back to playing in a live environment, it'll be fascinating to see how things change from what they were before COVID-19.
2 + 2 = 5
Top

I've been playing online Hold-Em with a group of 20ish friends for the last couple of months.
Other than the initial buy-in of $25, I've been playing with house money the whole time.
We usually do $20-30 buy-ins, with a $100 every other week.
My winnings have been as high as $1200. Of course that has dwindled down due to using it to buy-in for games.
Right now my balance sits at $300. I've gone cold. It's amazing to me how many times I've folded a shit hand pre-flop only to see it turn into gold. Is it due to online shenanigans? Unlikely. Due to some sort of collusion? Again, unlikely. But it is interesting to see the difference in play between live and online.
I started out playing my normal, relatively conservative way. My nickname is Snake, because I'm known to hide in the bushes and strike when least expected. but I've had to adapt as that was not working online. I don't, and =never will buy into the train of thought that you can read other players. You can truly never know what a player has or is going to do. So I've worried about just playing my style. But online, I agree you must be more aggressive.
It makes my dookie twinkle.
Top
Post Reply
85 posts