I'm a little surprised by this one: 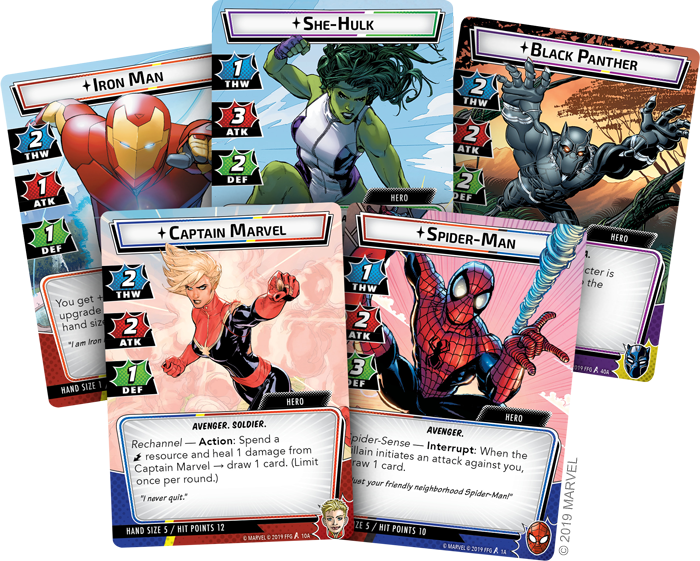 Marvel Champions: The Card Game sees players taking on the roles of iconic heroes from the Marvel Universe as they try to stop infamous villains from enacting their devious schemes. With over 350 cards, 100 tokens, five hit point trackers, and more, the Marvel Champions: The Card Game Core Set gives you everything you need to start your journey in the Marvel Universe, letting you play as Iron Man, Captain Marvel, Spider-Man, Black Panther, or She-Hulk, combining your powers with your fellow heroes to take down the rampaging Rhino, the cunning Klaw, or the utterly terrifying Ultron!

Marvel Champions: The Card Game places just as much emphasis on your character's alter-ego as it does on their hero form. Many cards in your deck aren't based on your hero's powers, but on their life outside their costume. As the leader of a nation, T'Challa (Core Set, 40B) has unique advantages compared to the more stealth-and-tech oriented Black Panther (Core Set, 40A). For example, only T'Challa can call on his Ancestral Knowledge (Core Set, 42) to find the proper course of action. But having a life outside of hero work also entails a certain sense of danger. Each of these alter-egos has their own obligations and responsibilities that your adversaries can target at the worst possible moment!

I also noticed they now have free shipping from their webstore. I guess they realized just how much they were losing to other retailers that could seemingly get people their games for less than $37 shipped.
Top

You're surprised Fantasy Flight came up with another way to print money?

I have high hopes for Marvel Champions's ability to lure my wife to the game table. Her favorite game is Marvel Legendary, which I will play with her, but I've never been a huge fan. With luck, the theme of Marvel Champions will bring her to the table, and (hopefully) the game play will keep me engaged.

I guess I figured Upper Deck had some kind of lock on the license, but maybe Fantasy Flight was able to convince Marvel otherwise based on all their other franchise/licensed titles. Normally this would be a day one purchase for me, but something about it just feels off. The card art is a little wonky, but I'll likely need to see a detailed play through/review before I consider it.
Top
Post Reply
4 posts • Page 1 of 1