After standing down the squadron for a short bit of rest all pilots either have no stress or one stress point so everyone is flying today. Here are the three targets that came up for evaluation:

Target 24 is a rail yard that seems well defended. There are 5 AA sites in the target area and 2 AA sites in each approach area. Potentially there can be as many as 11 bandits loitering in and around the target and it will take a lot of bombs to put the rail yard out of action. (16 hits!)

The other two targets are less heavily defended but we would have to split our force for those missions. We're able to take on both those targets because they are marked as "secondary". The "POL" in POL Storage stands for "Petroleum, Oil, Lubricant" which are vital components for keeping the machinery of war humming along. Less VP per target but if they're both taken out it adds up to 3 VP in the end. The rail line has 3 AA sites in the target zone and none in the approach areas. Up to 9 bandits can appear around the target. The POL storage site has 2 AA sites in the target area and 1 AA site in each approach area. It's light on the presence of bandits however with perhaps one over the storage area.

I'm thinking the smaller missions are easier to accomplish vs sending everyone at the bigger rail yard. The rail yard is pretty heavily defended and I'm concerned that we'll take a lot of losses before we can even bomb the target. Then again, one massive all bets on one mission strike is really exciting!

I would go for the rail line and POL storage. Between the two of them, you're facing less opposition and have to score less hits than the rail yard.

You do draw more event cards, but such is life.
Black Lives Matter
Top

NickAragua wrote: ↑Mon Jan 27, 2020 5:11 pm I would go for the rail line and POL storage. Between the two of them, you're facing less opposition and have to score less hits than the rail yard.

You do draw more event cards, but such is life.


We are in agreement! And with luck we can take out one or both of the targets using stand off missiles like the Maverick since they're low hit count targets. Also more event cards may mean a chance to get one of our downed pilots back!
Black lives matter! 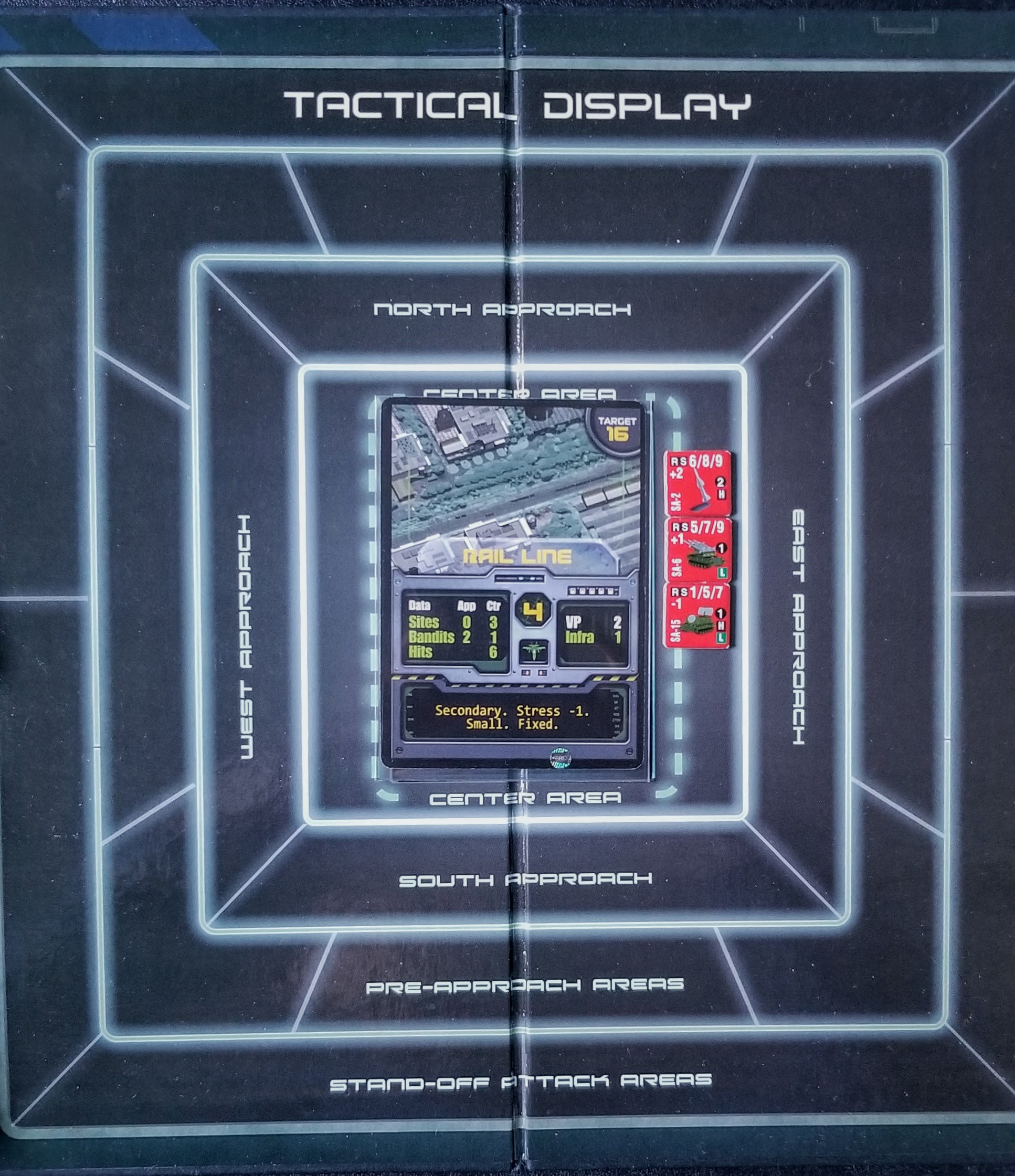 Gentlemen, the first target for today is a rail line located in the northern region of Iran. We are hoping to interdict the flow of supplies and reinforcements to Iranian forces in the south. It's a small target so we may have to use a combination of iron bombs and stand off ordinance. Note the lack of SAM sites around the target with only 3 sites at the target site itself. The SA-2 is only operational against high altitude targets while the SA-15 can target planes at high and low altitudes. The SA-6 can only acquire low altitude targets. If we take out the SA-6 and SA-15, planes can make their bomb run at low altitude and avoid the SA-2 battery. After taking out the SA-6 and SA-15 we should begin our approach towards the target at low altitude to stay off the SA-2's radar.

The estimated number of bandits in the area can be as high as 9 so we should also be prepared for air to air engagements and equip planes accordingly.

Pilot assignments will be posted for this mission shortly. Good luck, pilots!

Here's the loadout for the first mission. GIZMO will take the air superiority role with DODGER backing him up. BOSTON and DODGER will have ordinance to take out the SAM sites and the rail yard while PYRO has some iron bombs to drop on the target.

The planes assigned to the rail yard mission leave the carrier and meet up with a tanker over Iran. As they fly north they attract the attention of some bandits but DODGER drives them off, using up all his Sparrow missiles. Hopefully, there aren't multiple bandits waiting for them over the target. 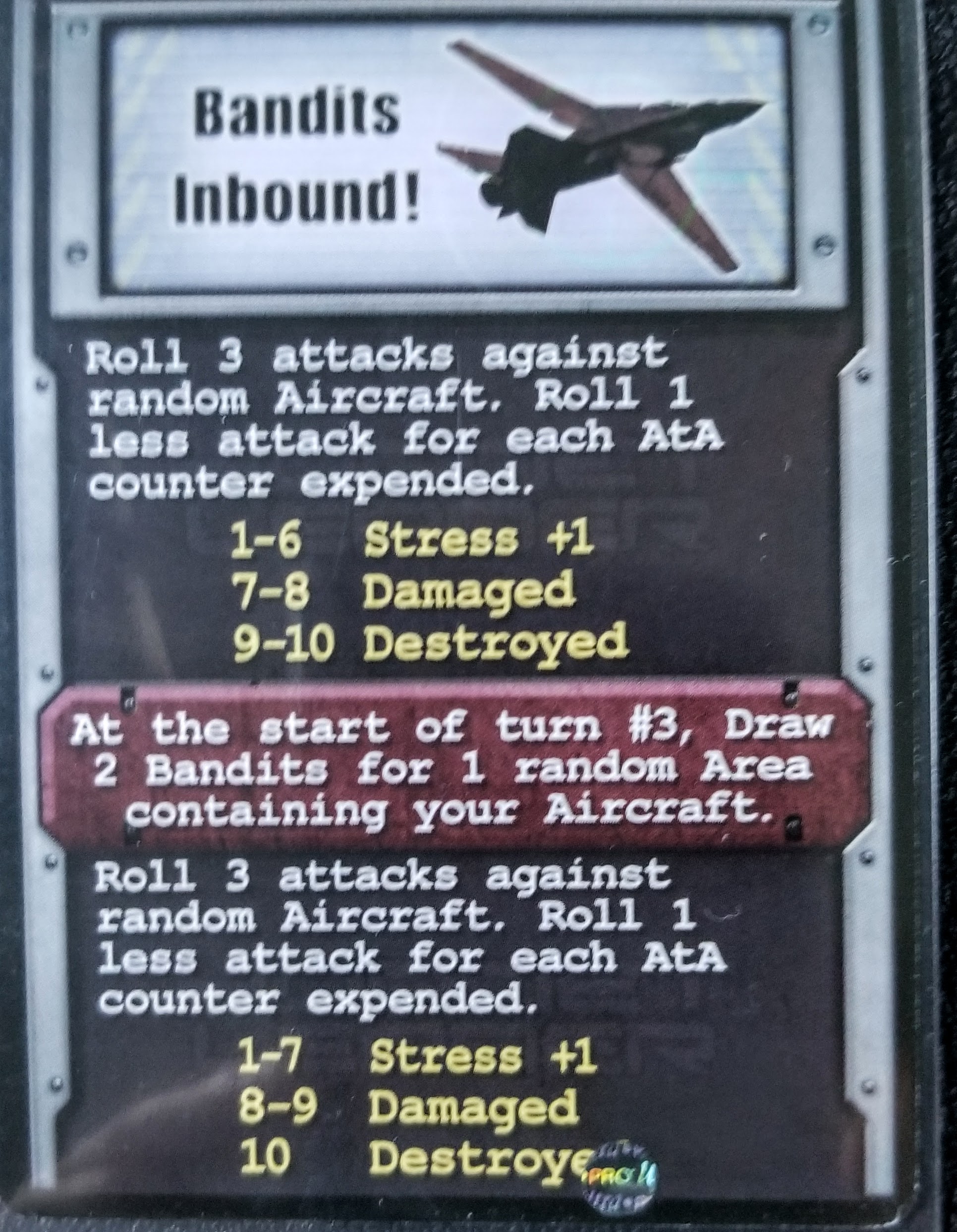 As they get closer to the rail yard, they only pick up two bandits near the target area which is a stroke of luck for our pilots. The Su-27 and MiG-25 can engage at long range but GIZMO is confident that he can take them out first with his AIM-120s. 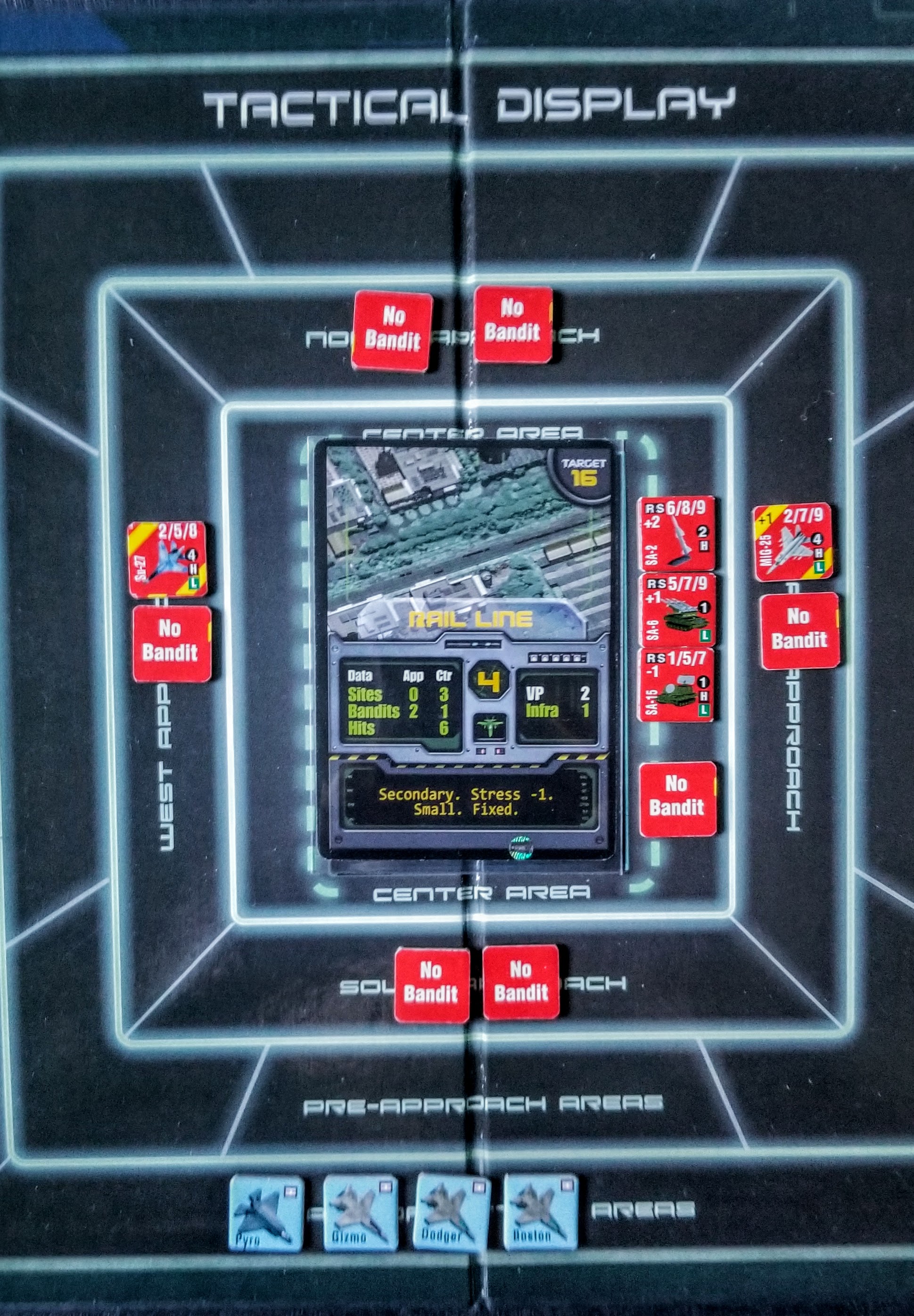 The tea shortage in Iran due to the war seems to be having an effect on the alertness of Iranian pilots and radar operators... (Yea, no hostile attacks for the first turn!)

Yeah, I almost started laughing as I kept drawing the no bandit counters but didn't want to break the lucky streak.
Black lives matter!

GIZMO acquires the two bandits around the target area and launches 4 AIM-120s. One pair streaks towards the Su-27 who manages to avoid one but not so lucky with the other as the remaining missile finds the plane. The MiG-25 meets a similar fate and the target is stripped of its air cover.

BOSTON fires two AGM-88s at the SA-6 site but both missiles fly wide of their target.

DODGER fires a pair of AGM-88s at the SA-15 site and scores hits with both missiles and the SAM site is eliminated. The planes start to descend towards their target. 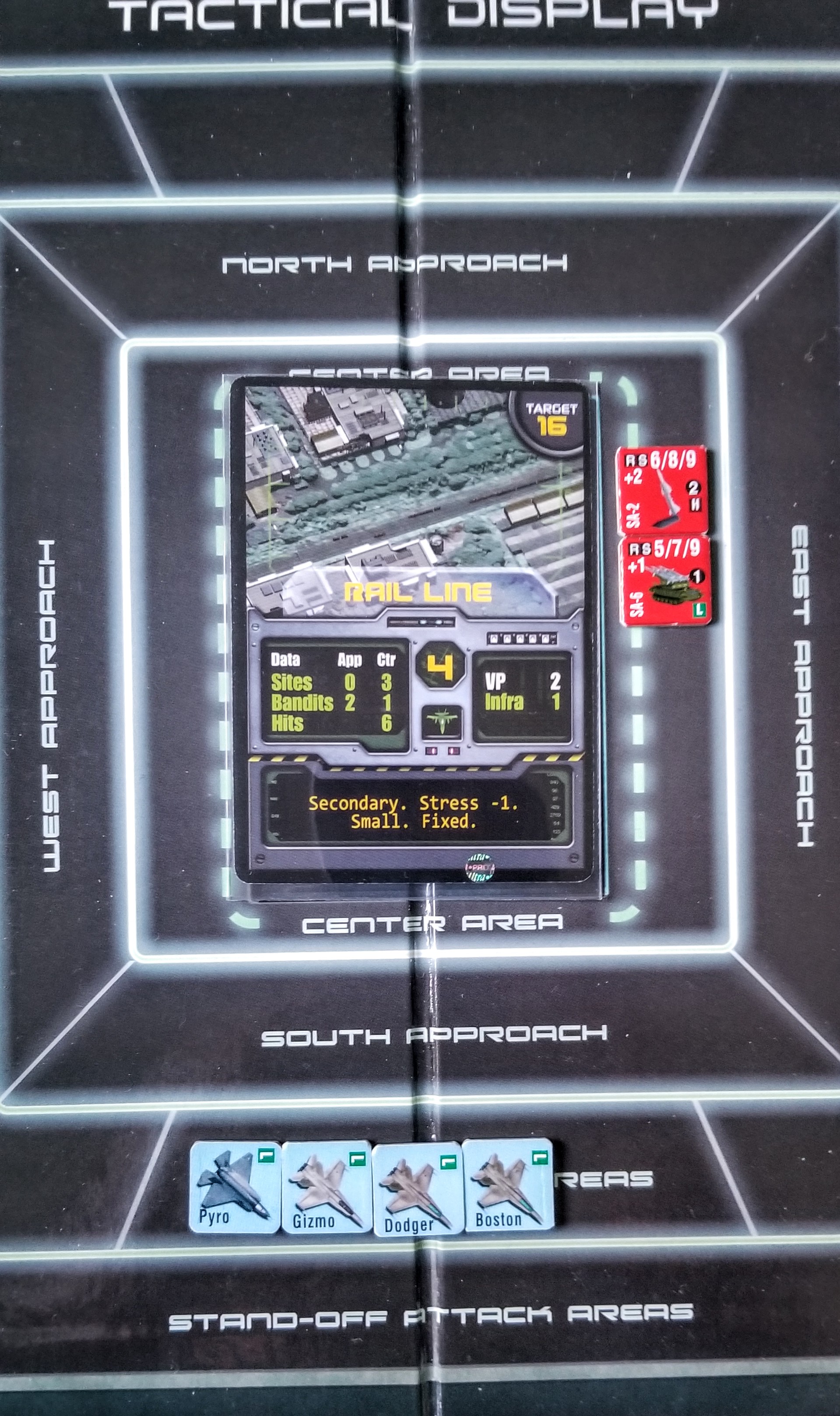 BOSTON fires his remaining AGM-88 at the SA-6 site and scores a hit. Since the only remaining SAM battery can't engage the planes at low altitude, the pilots have complete control of the skies over the rail yard.

DODGER fires his AGM-65s at the target but they end up causing no damage to the rail yard. (uh oh)

The planes fly closer to the target unopposed.

BOSTON launches all his AGM-65s at the rail yard. Two of the missiles slam into the target and cause some damage (two hits) while the third one harmlessly explodes away from the rail tracks.

PYRO begins his bomb run with BOSTON accompanying him since he has an eye for air to ground attacks and can strafe the target if necessary. (due to the small size of the target there's a -1 AtG to hit modifier. BOSTON has a +1 AtG modifier so he's the only one who has a shot at hitting the target with his guns since a 10 is needed to hit with guns) 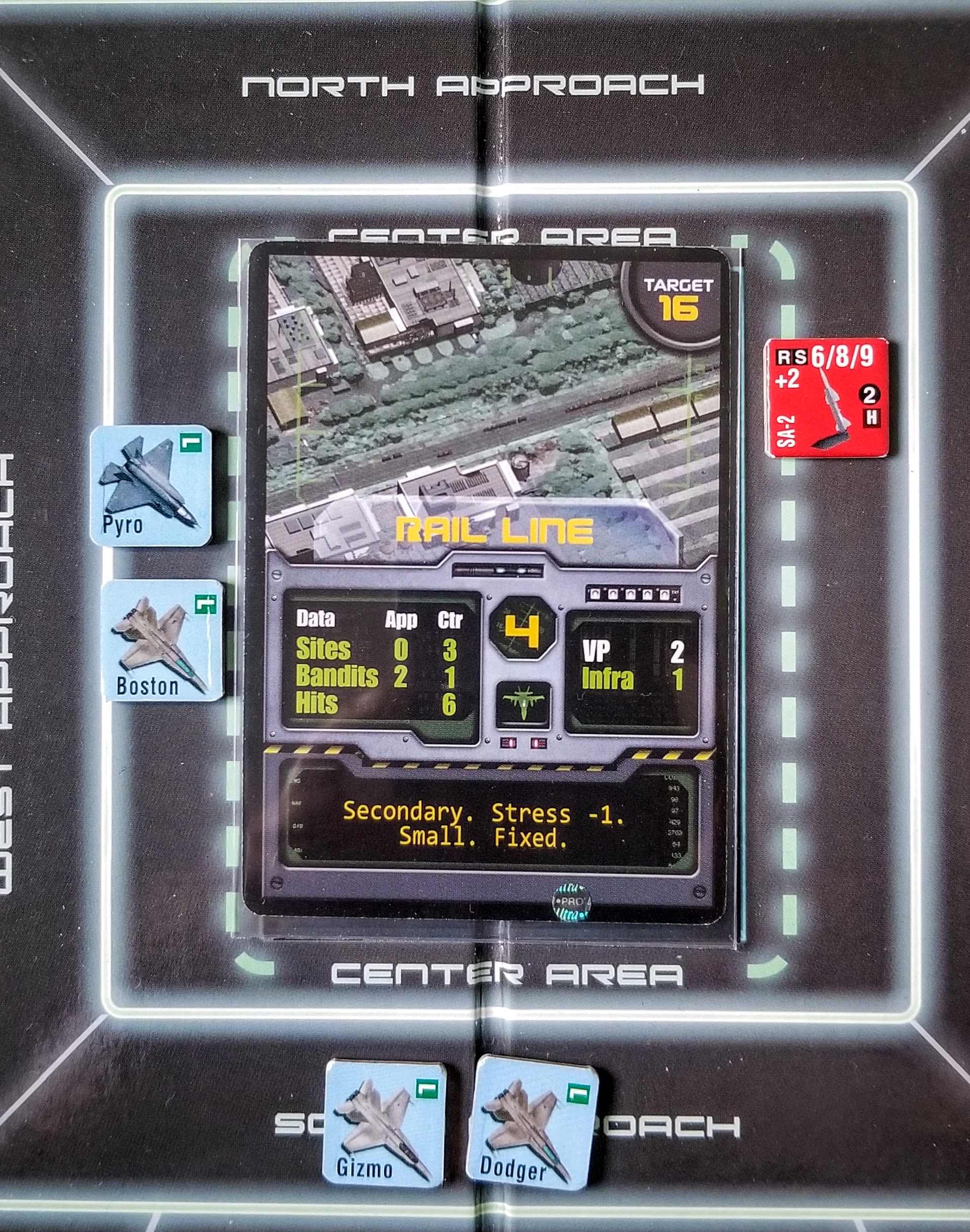 PYRO drops his three Mk83 iron bombs on the rail yard. Two of the bombs cause major damage (2 hits). The third one causes some fires in nearby structures but enough of the facility remains intact. However, as a disappointed PYRO looks back at the target he sees that the fires caused by his last bomb spread to some oil tank cars which explode and cause widespread damage to the facility, taking it out of operation. Mission success!

So after PYRO's bomb run he scored a total of three hits. His last bomb had a roll of 7 which would have been worth two hits but because of the "small" keyword on the target the 7 result turns into a 6 and we would have been one hit short with only 5 hits on the target. However, our infra level was high enough so that targets take one less hit to destroy and 5 hits are enough! 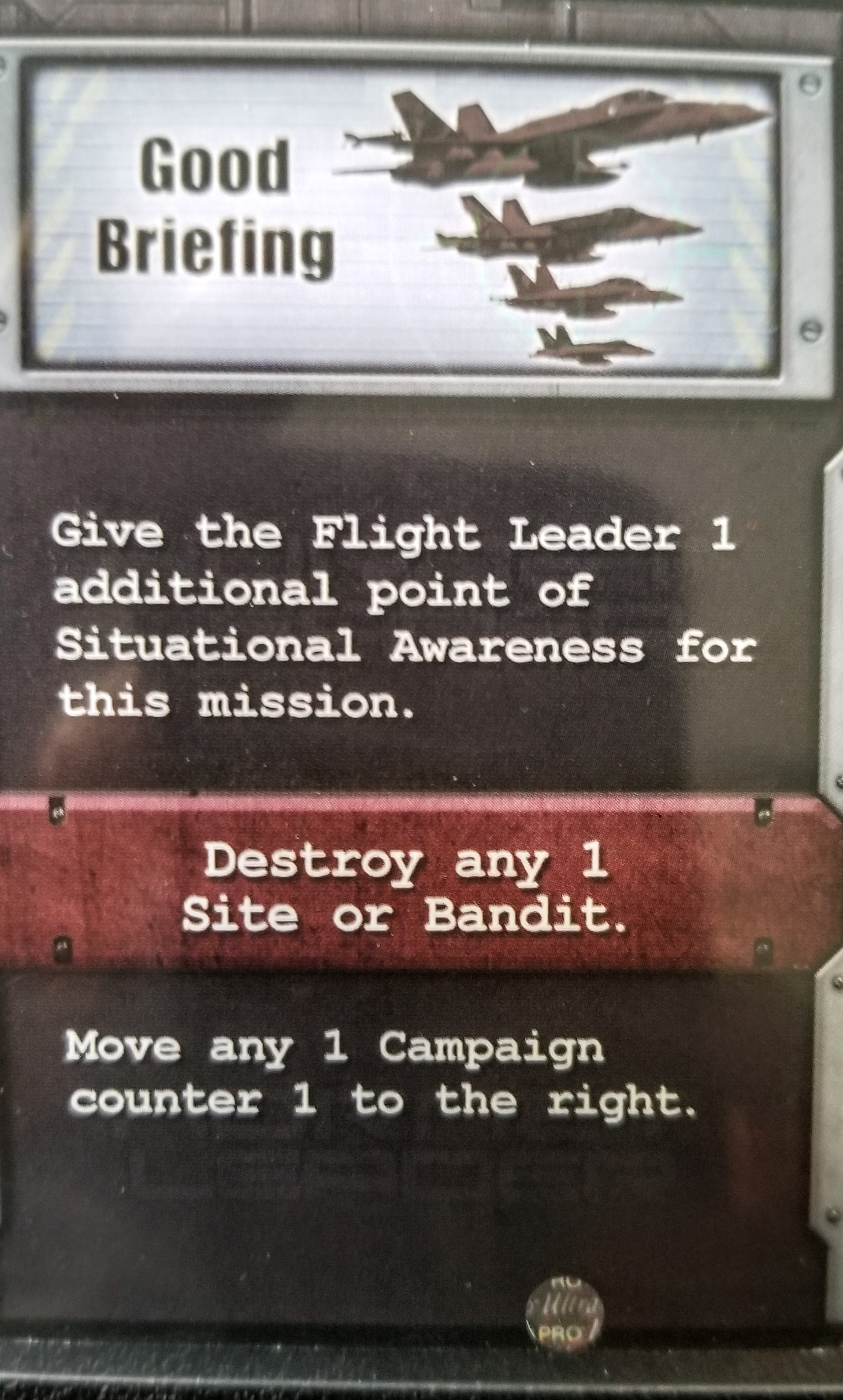 I choose to move the intel counter and now one less site is placed in the target space which hopefully will come in handy for the next mission.
Black lives matter!

Not enough barrel rolls, but I guess a win is a win.
Top
Post Reply
131 posts