One of my most memorable days at the game shop was when one of the owners pulled out a copy of 1988's Central Casting: Heroes of Legend. The group and I wound up with some interesting characters. I wound up as a minotaur-type creature, while one friend had a family history of a life of crime. We decided that his ancestors had rustled mine.

The book, sadly, appears to be out of print. But this is the internet, and things can be ... found.

So I'm going to run through the character creation and see what we get.

Family: Parents only - no extended family, no siblings

Time of birth: February, or second month on a 12-month cycle

Place of birth: Hospital or Healer's guild hall (Odd for a primitive child...)

Unusual birth circumstances: A person of note in the vicinity died at that time.
- those that know you will treat you differently because of this (and totally not because of the fur)

Parental occupation: Head of household is a fisherperson, other parent has no occupation

Parental items of note:
- Dad
- - known for his good hygiene
- - had two unusual birth circumstances
- - - his skin is ... red violet (also Magenta, hot pink)
- - - he has three psychic powers
- - - - Clairvoyant II (can select what to focus on and receive clear visual impressions)
- - - - Psychometry (can learn an object's history by touching it)
- - - - Body Control (Temporarily increase any attribute by 1d4 points)
- Mom
- - had one unusual birth circumstances
- - - her mother died in childbirth

Life events:
Age 3, you developed jaded tastes for exotic and possibly expensive pleasures.
Age 4, has an encounter with halflings and befriends them.
Age 5, you knew that you were deeply loved by your parents
Age 17, you gained a friend, a female spy for a local government.
Shortly after you reached adulthood, you had a romantic encounter.
- Your lover was unfaithful, and you have split up, but remain good friends.

Alignment and Attitude:
- Neutral
- Your love of exotic pleasures has made you Lazy, as you know that they are difficult, if nigh impossible to obtain.
- Your friendship with halflings has made you Curious.
- The love of your parents has made you Generous.
- The friendship of the government spy has made you Self-Confident.
- The failed relationship has made you Aggressive.
Black lives matter
Top

I remember that series! It was pretty unique back in the day when most RPG characters were combat stats and not much else. I should dig up a copy for inspiration when I need it.

I'm actually just starting an online Pathfinder 2 game. My first character concept seemed like a lot of fun. I decided to go with an Oracle for the class (has divine powers from some source other than a god), with the Ancestors specialization (the characters ancestors speak to him/influence him as the source of power, with the disadvantage that sometimes one of them will exert itself, making one type of task easier (physical combat, magic, or skills while making the other two harder to use.) I scratched my head over it for a bit, then hit on an idea: Half-orc. That means that this guy has a group of peaceful farmers standing over one shoulder urging patience, and a tribe of orcs standing over the other, urging a more... extreme response. He'd be constantly in flux between the two, arguing with voices only he could hear. When one ancestor asserted influence, I'd use certain dominant ancestors with specific traits to play it out (for instance, it would be Dogar, an orc warlord in my ancestry who took over when I rolled 'physical combat', and I'd play the part.) Influences:

Deep Space Nine, when Jadzia found that one of her previous hosts had been a serial killer
Umbrella Academy (Klaus, but with multitudes of spirits)

I ended up backing away from the character and switching to something else when I realized that I really want to read a book (or watch a show) about this character, but roleplaying him to his potential without making him annoying would be exhausting. Especially given that the GM plans to record the sessions and publish them to YouTube. 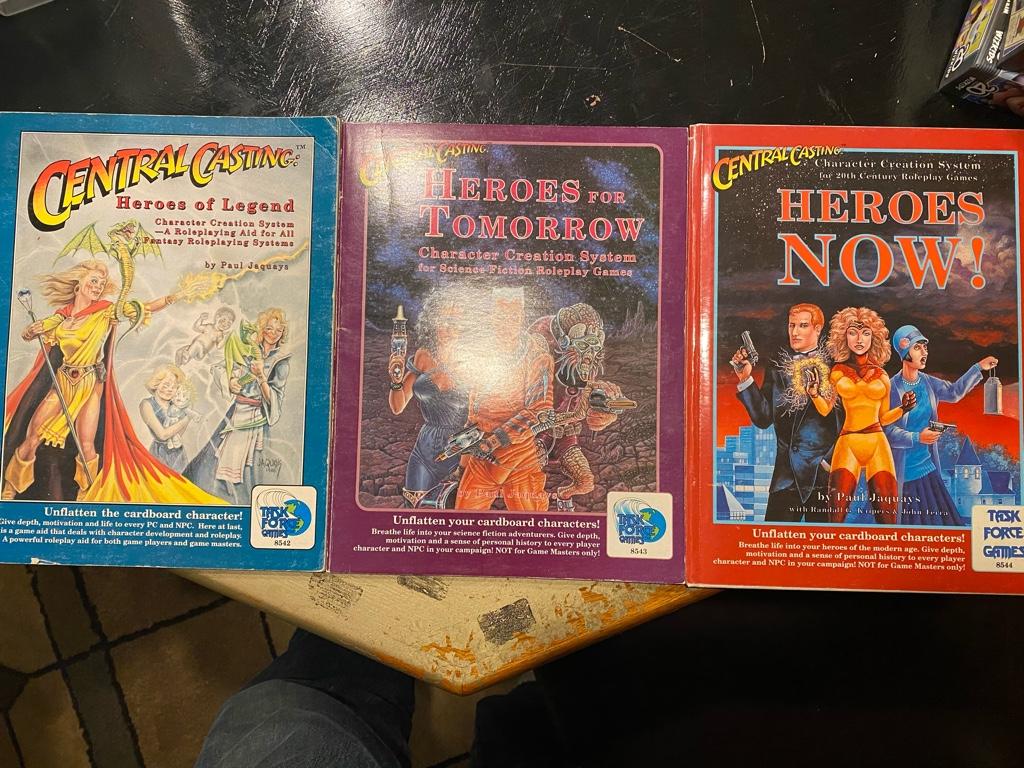 "Women are naturally secretive, and they like to do their own secreting." - Sherlock Holmes, A Scandal in Bohemia
Top

So you're making our next character, right?
Black lives matter
Top

Very interesting. If you like this sort of character creation, I suggest taking a look at Chaosium's updated lines for Runequest and Pendragon/Paladin. As a medievalist, I really like the Paladin book, as you basically create a character and a dynasty set in the (fictional) realm of (real) Charlemagne as seen in medieval epic tales. Both have similar mechanics where you build a family history, then a character history - all before you actually play.
My Youtube channel: https://www.youtube.com/user/CythUulu/videos
Top
Post Reply
5 posts • Page 1 of 1