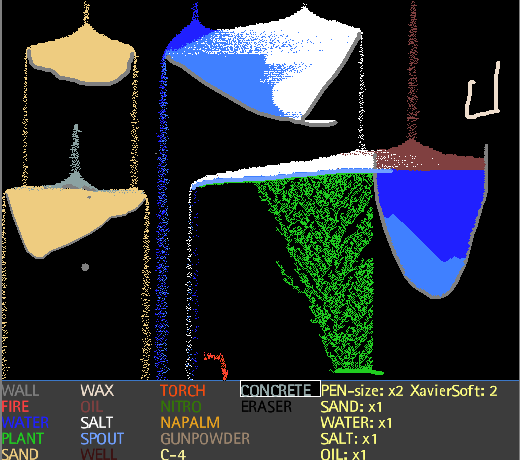 Eventually others made more advanced versions of this - like the app: Powder Toy
https://play.google.com/store/apps/deta ... dertoy.tpt

which is still updated and fun to play around with (if you've never seen, check it out).

But now there is Noita
This game (Early Access) is so much fun!!

You are a mage with a wand, and you enter a cave and find more wands and other loot... but you will die soon... and restart...

by far the most hours i've put into a game this year. this meets my picky criteria for staying with a title, as it's very satisfying to play - the sort of game i would have been always been into, had the computing power for these 'physics' been available back then. it's extremely tough and unforgiving, but the 'fun factor' is always there and your skill at actually playing will increase, allowing you to keep alive longer and longer. a big part of the game is to not keep progressing vertically to the next level, but explore horizontally as much as possible, only advancing when your health is really low. i am going to have to read up on alchemy, as it's never explained in the game how to do it. great sound design as well.

still in Early Access and it just received a price increase, but it's continually updated with new content. and the publisher Nolla Games also put out the fantastic Baba is You.
Top

I've been playing this for the past few months off and on. The physics with the fire and water is really cool and the explosions are satisfying. I really like a good rogue-like game and this is a good one.

Hope they have a big update when it's released.
Top

it's out of early access today. spent my lunch break playing - some things have changed and it's definitely _more_ difficult now.