I just didn't care for the Wrath of Khan uniforms. I do like the newer Trek films uniform style.
words
Top

Two close associates of Pope Francis have accused American Catholic ultraconservatives of making an alliance of “hate” with evangelical Christians to back President Trump, further alienating a group already out of the Vatican’s good graces.

The authors, writing in a Vatican-vetted journal, singled out Stephen K. Bannon, Mr. Trump’s chief strategist, as a “supporter of an apocalyptic geopolitics” that has stymied action against climate change and exploited fears of migrants and Muslims with calls for “walls and purifying deportations.”

The article warns that conservative American Catholics have strayed dangerously into the deepening political polarization in the United States. The writers even declare that the worldview of American evangelical and hard-line Catholics, which is based on a literal interpretation of the Bible, is “not too far apart’’ from jihadists.

It is not clear if the article, appearing in La Civiltà Cattolica, received the pope’s direct blessing, but it was extraordinary coming from a journal that carries the Holy See’s seal of approval.

‘China is the best implementer of Catholic social doctrine,’ says Vatican bishop
"The world is suffering more today from the good people who want to mind other men's business than it is from the bad people who are willing to let everybody look after their own individual affairs." - Clarence Darrow
Top

Trump colludes with Russia, the Pope colludes with the Chinese. The Pope is at least serving the Catholic Church's goal of being allowed to operate freely in a foreign state.
"If the facts don't fit the theory, change the facts." - Albert Einstein
"When the president does it, that means that it is not illegal. - Nixon
"I don't stand by anything." - Trump
“Bad men need nothing more to compass their ends, than that good men should look on and do nothing.” - John Stuart Mill, Inaugural Address Delivered to the University of St Andrews, 2/1/1867
Top


The Vatican announced Monday that it would open up its secret archives on the World War II papacy of Pope Pius XII, whom some scholars have accused of keeping silent about the Holocaust.

Jewish organizations have long called for the Vatican’s archives from this period to be made accessible, saying the then-pope turned a blind eye to the systematic persecution of Jews by Nazi Germany and fascist Italy. But Pius’s actions during this period are up for debate, and others say he worked behind the scenes to help Jews.

“The church is not afraid of history,” Pope Francis told members of the Vatican’s Secret Archives division. He said the period of Pius’s papacy from 1939 to 1958 would be opened to researchers on March 2, 2020.
...
Pius was declared “venerable” in 2009, part of the process toward sainthood. But the questions about his conduct during the war have likely slowed or stalled the process. Three of the four popes that succeeded Pius XII have already been sainted, including Paul VI last year.


A coalition of conservative Catholic clergy and academics have accused Pope Francis of heresy, citing what they call overly liberal positions on topics like religious diversity, homosexuality and communion for divorced Catholics.

“We take this measure as a last resort to respond to the accumulating harm caused by Pope Francis’s words and actions over several years, which have given rise to one of the worst crises in the history of the Catholic Church,” the coalition wrote in a 20-page letter to the College of Bishops, published Tuesday by the conservative Catholic site LifeSiteNews.

The letter singles out the 2016 papal document “Amoris Laetitia” (The Joy of Love) for special criticism. In the document, Francis called for making the Catholic Church more welcome toward “imperfect” members, such as divorced Catholics who have remarried in civil ceremonies.

Church law does not allow remarried divorced people who have not received an annulment to receive communion unless they abstain from sex with their current spouse. Francis called for flexibility on this doctrine, allowing priests and bishops to make case-by-case decisions.

The letter also lambastes Francis for saying Martin Luther’s intentions in sparking the Protestant Reformation “were not mistaken,” and for signing a joint 2016 statement with Lutheran leaders expressing gratitude for the Reformation’s “theological gifts.”

Oh yeah, he's much worse than the systemic coverup of abuse. (one of the) Worst crisis in the history of the church, for sure. I'm certain God is simply furious.
Top

Pope Francis issued a groundbreaking law Thursday requiring all Catholic priests and nuns around the world to report clergy sexual abuse and cover-up by their superiors to church authorities.
Top

Victoria Raverna wrote: ↑
Thu May 09, 2019 10:25 pm
Pope Francis issued a groundbreaking law Thursday requiring all Catholic priests and nuns around the world to report clergy sexual abuse and cover-up by their superiors to church authorities.

I like Pope Francis. He seems like a good man... Unlike Benedict who always had a sneer on his face like he just got through skinning a barrel full of puppies.

You know, I always wondered about that. Why the heck did ol Benedict always sneer at the cameras?

Maybe this explains it... 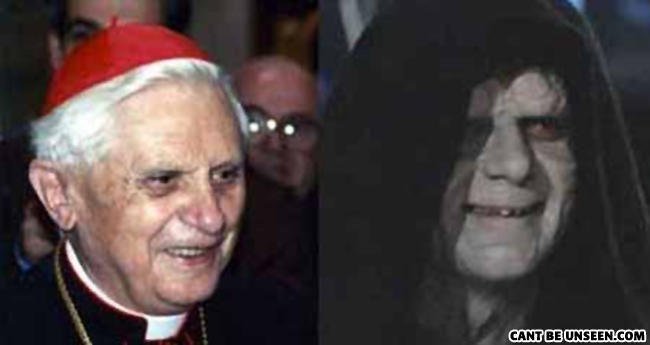 I think a Pope using Force Lightening would spike the conversion rate considerably.
I don't remember where I read this, Cort, maybe it was in the last patch notes, but they said the UAZ really handles the best when... the wheels are actually touching the ground.
--RedF1ve
Top
Post Reply
214 posts