Picked this up the last few days to try out the new update and DLC. So far so good. Some have mentioned the DLC is a little pricey ($20) for what you get, and could be true for some, but there's quite a bit more under the hood in terms of new research, items, factions, quests, etc to make it worth it for me.

The first obvious addition is another final quest to entertain and protect the emperor of a fallen empire for a set amount of time in exchange for being taken off planet with him. To get to that point that you have to advance in rank with the empire to be a count which requires a number of quests of various difficulties to be completed.

The tech tree is a lot more fleshed out now on the upper end with the base game now giving the ability to research bionics, better powered armor, etc. They also incorporated one of the more popular mods into the base game which adds an assortment of new animals and general wildlife.

I've also seen a nice new assortment of general quests to complete like one where I had to receive a shuttle of prisoners, and keep them alive and secure for a few days until a shuttle came to pick them up.

Anyway, the new quests do a good job of making the early and mid game a little more unique, and the fleshing out of the tech tree makes the late game much, much more interesting. +1 from this Rimworld vet.
Top

$20 would be pricey to me because I didn't play that much. For some people who spent so much time and got so much enjoyment on the game, that doesn't seem like a lot to drive. Paying people for what they've done for my enjoyment feels so much better than paying people and hoping to get something out of it. This is why I own all but one of the Band of Brothers DLC and to blindly purchase stylistic driven Klie or Abbey games while I'm loathe to buy into season passes and multitudes of tiny DLC for the plethora of Paradox games I seem to buy and then put away.
Top

$20 will be pricey for me, too - until I get in the mood for RimWorld again. I've sunk hundreds of hours into the game and love the way it plays - but I can't sustain all of my gaming moods with it and will eventually cycle back to it. In that moment I'll pick up the DLC and look for a new set of mods.
Black Lives Matter

Looking around a little more, I'm actually kind of excited to see what modders can do with the new stuff. 1.1 had a lot of quality of life updates for modders in general, and the DLC has a framework for factions to have ranks, and players to be able to complete quests to attain them. I can imagine a lot of cool stuff modders will be able to do with that alone.
Top

I completed a few missions for the empire to gain favor and one of my pawns is now up to the rank of knight of the empire. You have to do extra things to keep noble pawns happy, but in exchange you start getting psi powers as you gain ranks, and among other abilities, the ability to call down a squad of imperial marines to sweep the map for you.

Steam and GOG have a sync that some developers allow so you can carry games from Steam over to GOG and play them. The selection is pretty thin.

GOG.com just got RimWorld, and the connection is not there for this one. I'm sorely tempted to get this on GOG the next time I want to play, just so I can throw more money at the developer. I've gotten hundreds of hours of fun out of the game and would love to see more of it.
Black Lives Matter

I have my noble up to a Baroness which is getting pretty close to the rank of Count that I'd need to start the final Imperial quest. My stumbling block now is that I need gold to make a royal bed and grand throne for my Baroness. She's got high enough happiness that the malus isn't causing problems, but it's a pretty hefty -30 for having both an unsuitable throne room and bedroom, plus I'll need gold to finish the Emperor's bedroom if I go down that path anyway.

I have a comm station now, but still no craft with gold have come by in the last few months, so I'm starting to think about sending a trading expedition to a local friendly city and seeing if they might have some gold to trade. My Baroness is a former medieval lady, so she won't do a lot of jobs, but she is a competent artist, so when I don't have her out in her powered armor hunting, I have her making art for the group. I'm hoping we've got enough excellent quality artwork stockpiled to trade for a bunch of gold. I'll need at least a few hundred for my immediate needs, and I'll need some to upgrade my research bench as well eventually.
Top

Only had time to play this a little more this weekend, but I'm enjoying getting to some of the new, late game research.

I've finally got the gold I need, so my Baroness has an impressive throne room and bedroom, not to mention I've got luxurious quarters setup in case any nobles come calling.

I did have one rough battle recently. A chunk of a mechanoid ship crashed on my map, and was slowly starting to poison all the plant life around it. It was protected by a sizable group of scythers and lancers. My colonists probably could have taken it on their own, but my baroness had some available reinforcement calls I hadn't used yet, and the call for a basic infantry squad was about to become available again, so I called in a squad of imperial jannisaries to lead the charge for me.

I split my colonists up to come at the mechanoids from two directions as the jannisaries attacked and things went pretty smoothly. Only serious casualty was my best medic, a dickish old man named Callum took a needler shot to the torso that completely destroyed his left lung. He survived, and I got him patched up, but the breathing penalty was making him a little slow getting around.

Thankfully, I had also accepted a mission from the Empire to watch 4 prisoners for a few weeks, and the mission requirements only state I need to put the prisoners on the shuttle when it arrives for them, not what condition the prisoners are in when they are picked up. So, problem solved, I pulled a lung out of one of the prisoners who tried to escape a bit after they arrived, and put it in my doctor.

I also traded for some bioarmor technology. I still need to finish researching the tech for it and a couple of prerequisites, but once I get those, I should be able to implant all my colonists with dermal armor mods, not to mention I'm getting close to being able to research recon powered armor.
Top 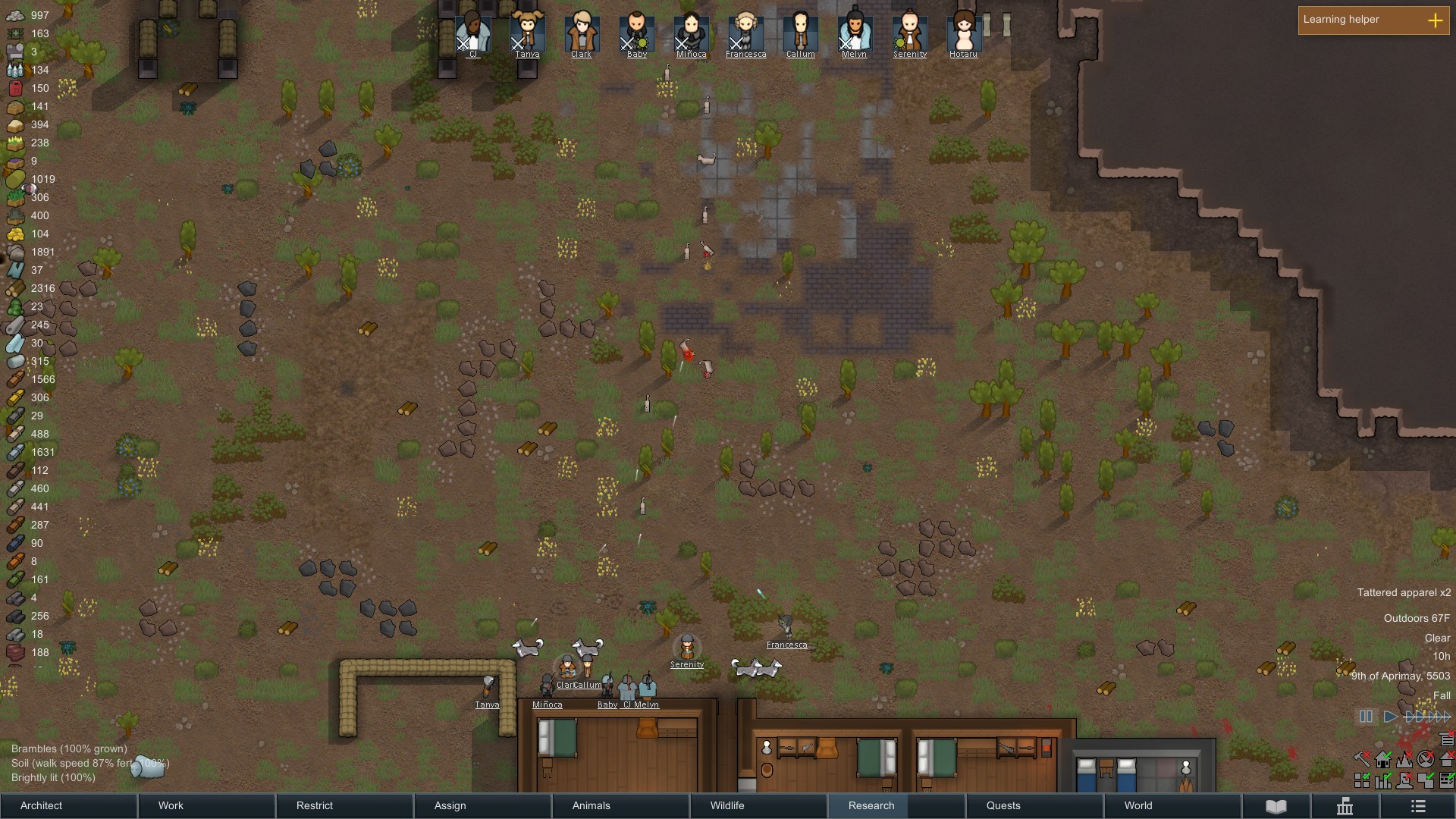 Last night I was attacked by a pack of wild cats. That is all.
Top

Just in case you haven't gotten the game and want to give it a go, RimWorld is now on Green Man Gaming and is on sale along with its DLC.
My father said that anything is interesting if you bother to read about it - Michael C. Harrold
Top

Hey, maybe it's time to give this game another try. I remembered that I already owned it, so I installed it and did the tutorial, then when I saved the game I looked at the last time I'd played it:

I looked in my "RimWorld stuff" folder (every game I get I create a "stuff" folder to keep files, zips, links, etc for it) and noticed that the last zip I'd downloaded of the game (before it was on Steam of course) was RimWorldAlpha14Win.zip

. I guess I few things have changed since then.

By the way, any of the three DLC worth picking up?
My father said that anything is interesting if you bother to read about it - Michael C. Harrold
Top

Yes. I think all of them add onto Rimworld. New religions creates world views, temples, ceremonies and conflict. Royalty adds an advanced tech faction who you can ally with to get prestige that gives a person access to increasing levels of help and mind powers, but increases their demand to have more, feel better, and do less. The newest one adds children who learn and grow, but consume time and resources. It also adds genetic variation that drives common traits, and some factions that will be even more hostile and incompatible with your colony. Some of the potential combos are crazy — cannibal zealot pigmen, peaceful tree hugger neanderthals, vampires, mechanicals.
"If the facts don't fit the theory, change the facts." - Albert Einstein
"I don't stand by anything." - Trump
“Bad men need nothing more to compass their ends, than that good men should look on and do nothing.” - John Stuart Mill, Inaugural Address Delivered to the University of St Andrews, 2/1/1867
“It is the impractical things in this tumultuous hell-scape of a world that matter most. A book, a name, chicken soup. They help us remember that, even in our darkest hour, life is still to be savored.” - Poe, Altered Carbon
Top
Post Reply
292 posts