That is not dead which can eternal lie, and with strange aeons bring us some web forums whereupon we can gather
http://www.octopusoverlords.com/forum/

by Kasey Chang
Just finished ME1 (LE) and it was an interesting ride. Like the story, and I can see teh writers did a tremendous job crafting the characters, though the "you must choose" near the end was kinda lame, and the final-final boss was sorta... cute.

Starting on ME2(LE) after sleeping, or maybe I'll take a day or two off and do something else.

by raydude
Finished Anno Mutationem last night. Since I can't describe it adequately myself, I'll just copy the Steam blurb on it:

ANNO: Mutationem is an action-adventure game with RPG elements set in a cyberpunk world, featuring a unique mix of pixelated 2D & 3D graphic style with a rich, dark and bizarre plot.

The fighting system is decent, and although there are only a few special moves it felt satisfying being able to string moves together to beat up the enemies. Defeating bosses required studying their attack patterns, dodging, then counter-attacking at the right times. The story was interesting; I was a little annoyed at some of the cutscenes trying to be mysterious by not providing enough context for what's going on, but I let it go. More context was provided at the end, but it was presented as a dialog dump to me. Oh well, it was still a good game and I enjoyed my time playing it.

The Temple of Elemental Evil

by Kasey Chang
Finished all ME games (ME trilogy and MEA) except for missable sidequests.

Taking a break, will probably move on to something else soon.

by YellowKing
"Finished" Dragon Quest XI S: Echoes of an Elusive Age. I put finished in quotes because technically I only completed the first ending/roll credits. You can keep playing and take down subsequent bosses to get a final true ending but I think I've had my fill and really have no interest in platinum trophying this one. Had a blast with it though, and it rekindled my JRPG love.

Think I'm going to hit either Valykyria Chronicles 4 or Tales of Arise next. I'm also in the middle of Yakuza: LIke a Dragon as my current PC game, and that one's a BLAST. Great game.

by Octavious
Finished 2 games this year. That may be a record. Also the one is gigantic.

In Progress
Spiderman Remastered *In Progress* (They REALLY padded out the game. I just want it to end at this point)
Demon Soul's (This seems way easier than I remember it. So far the first 4 bosses are super easy to cheese. The tower knight took me 2 tries. Spider 1 try... Etc... Weird...)

I was in such a gaming funk until Elden Ring came out. And now I'm having so much fun with various games again. So weird as I couldn't get myself to focus on a game until that came out.

by raydude
Finished "Pony Island". I hear there is another ending which one can get by getting all 24 tickets but I feel satisfied with the ending I saw. And there's always Youtube

by Dave Allen
Its been years since I got to the end credits in a game. Today I got to them in Mutant Year Zero. What an awesome game.

by YellowKing
Finished Tales of Arise (PS5) - I'll post my thoughts in the official thread.

by raydude
Finished South Park: The Fractured But Whole. I haven't really followed South Park a lot since the first few seasons, but I loved the movie. All the tropes that I remember are in it, and a few that I missed out on - like the 'member berries. I stopped doing the toilet achievements as those got old real fast but I completed a lot of the other side quests except for Big Gay Al's cats and finding all the Tweek and Craig yayoi. Ended up being a cisgender. girl. american. chinese. lawful. buddhist. Hehehe, I liked when the other redneck asked "why are you talking like that?" "Dialogue Tree." "Oh".

by Isgrimnur
Far Cry Primal is in the books. 30 hours, 71% completion, got as many skill points as I could and still ended up four short of a full tech tree.

by Baroquen
As I mentioned in the game thread, Triangle Strategy is completed.

Fortnite - much less
Fall Guys - every once in awhile
MLB the Show - most days; keeping up with the Diamond Dynasty content
Shop Titans - daily; mobile PTW time waster
SW:KOTOR - slow progress, but I haven't shelved it yet

And now that Triangle Strategy is done, I've started Dragon Quest 3 and am enjoying it. I may purchase Live a Live (on Switch) because I'm really intrigued by it, and would like to support Square Enix revamping/developing games like this. But at least, for the moment, I'm giving DQ3 time first.

by Kasey Chang
I am VERY close to finishing the last 3 achievements in Mini Motorways. Unfortunately, these 3 are the hardest for me.

Decided for a change of pace and went to play Grid Legends, part of earlier Prime Giveaway, IIRC. It was interesting, a real throwback to GRID Race Driver, but now with decent FMV.

by TheMix
Finished the story in Control. Remedy really does some nice stories.

I'll second that. Control is a great game!

I'll second that. Control is a great game!

by TheMix
Finished up a replay of Dying Light. Was in the mood for killing zombies.

Still the worst ending ever (the game play, that is). The last 20-30 minutes are terrible. And the QTE for the final "fight" can go suck it.

by El Guapo
So I'm finishing up with Battletech. Finished the main campaign. Have done several "flashpoints" via one of the DLCs, which on the whole I've been impressed with - provides several mini-stories, which makes the post-campaign game definitely more engaging than just doing repeated "fight a bunch of random mechs somewhere" missions over and over. Still, generally ready to move on from the game.

I'm interested in thoughts on what I should play next. Main contenders right now:

Any recommendations among these? Any other games that I should be considering?

by NickAragua
Playing:
Mechwarrior 5 (main campaign run through, but stopping to smell the roses)
Phoenix Point (kind of losing steam, there's only so many times you can blow limbs off of crab dudes before it starts getting boring)
Lord of the Rings Online (going through the epic storyline. slowly.)
Megamek

Abandoned:
Probably a bunch of stuff I don't remember

Pillars of Eternity 2 is pretty good, it helps but is not required to play PoE 1 before hand. I cranked the difficulty all the way up, so the beginning was pretty tough and tactically challenging, but by the end I was plowing through wave after wave of bad guys no problem. Story's pretty decent, but, as usual with these things, the really good stuff is the intra-party interaction.

Haven't played Cyberpunk, but I feel like after a couple of years' worth of patches it's probably playable.

Haven't played Total War 3, but we're not exactly talking about an unknown genre here. I'd be down to do a coop campaign, since it's got campaign coop.

by El Guapo
Also giving some thought to play the Starcraft 2 Protoss campaign. I played the Human game awhile back, and started the Zerg campaign before getting bored and stopping. I do love the protoss, though, and feeling a little nostalgic for ol' Starcraft...

by YellowKing
Finished Far Cry 6 and will post thoughts in the official thread. The PS5 has been an absolute game changer (no pun intended) for me in terms of actually completing stuff. I've got it in the media room that the rest of the family doesn't really use, so it's become a bit of a gaming getaway where I can generally get a couple of hours in a night (if I want it). I've finished 4 30+ hour games this year which is practically unheard of.

by Kasey Chang
Finished Grid Legends Story Mode quite easily on Medium, probably should have turned it up a notch.

Was grinding through "career" mode when one change on difficulty setting (there was no warning for this) somehow caused the entire career to reset. I had done 7 out of 9 events to unlock the final series, aka the GRID Gauntlet just before this. The reset zero'ed EVERYTHING (amateur tier, semi-pro tier, AND pro-tier) caused me to rage quit the game and it was uninstalled.

The game also FORCES you to drift and drift was never one of my strongpoints in these games. The gamepad was NOT good in modulating the throttle to sustain the drift, esp. when no other part of driving on medium requires modulating the throttle. It's almost always full on throttle everywhere else. This makes Gauntlet practically speaking, unreachable, since without drifting you can't ever unlock the final series, GRID Gauntlet.

There are also events locked behind paid DLCs. 4 of the events in "GRID Challenges" are Ravenwest Invitationals, and those are only in the paid DLC "Ravenwest / Voltz Pack" so that's 4 events you won't ever complete. Many of the more special cars are locked behind "sponsorship specials"

And of course, "season 2" was Demolition Derby (a new event type) which is another DLC. And so far, the only way to get them is get the "Deluxe Edition" or Deluxe Upgrade (which isn't being sold, AFAIK)

Looking at the car list for GRID 2019 shows that no new cars were added, it's ALL the same cars from GRID 2019. That just makes GRID legends look... like a re-tread.

by hitbyambulance
finished Save Room (the Resident-Evil-4-inspired inventory-management puzzle game mentioned in another thread). it was too easy, which was disappointing. only the penultimate puzzle gave me any trouble at all. but it got it in a bundle, so for about $0.79 it was fine.

by Isgrimnur
Finished Astro's Playroom on the PS5.

by naednek
Finished A Plague's Tale: Innocence. Had it on the Xbox game pass for PC and it is set to be pulled from the service in 3 days. At about Day 11, I had about 12 chapters to complete. Made it my goal to finish. Now I'm thinking I should put deadlines on games to finish because it sure motivated me to focus and play

by TheMix
Been doing some old school FPS'ing.

Took down F.E.A.R. and the expansions.

I forgot how much fun the HVP is. 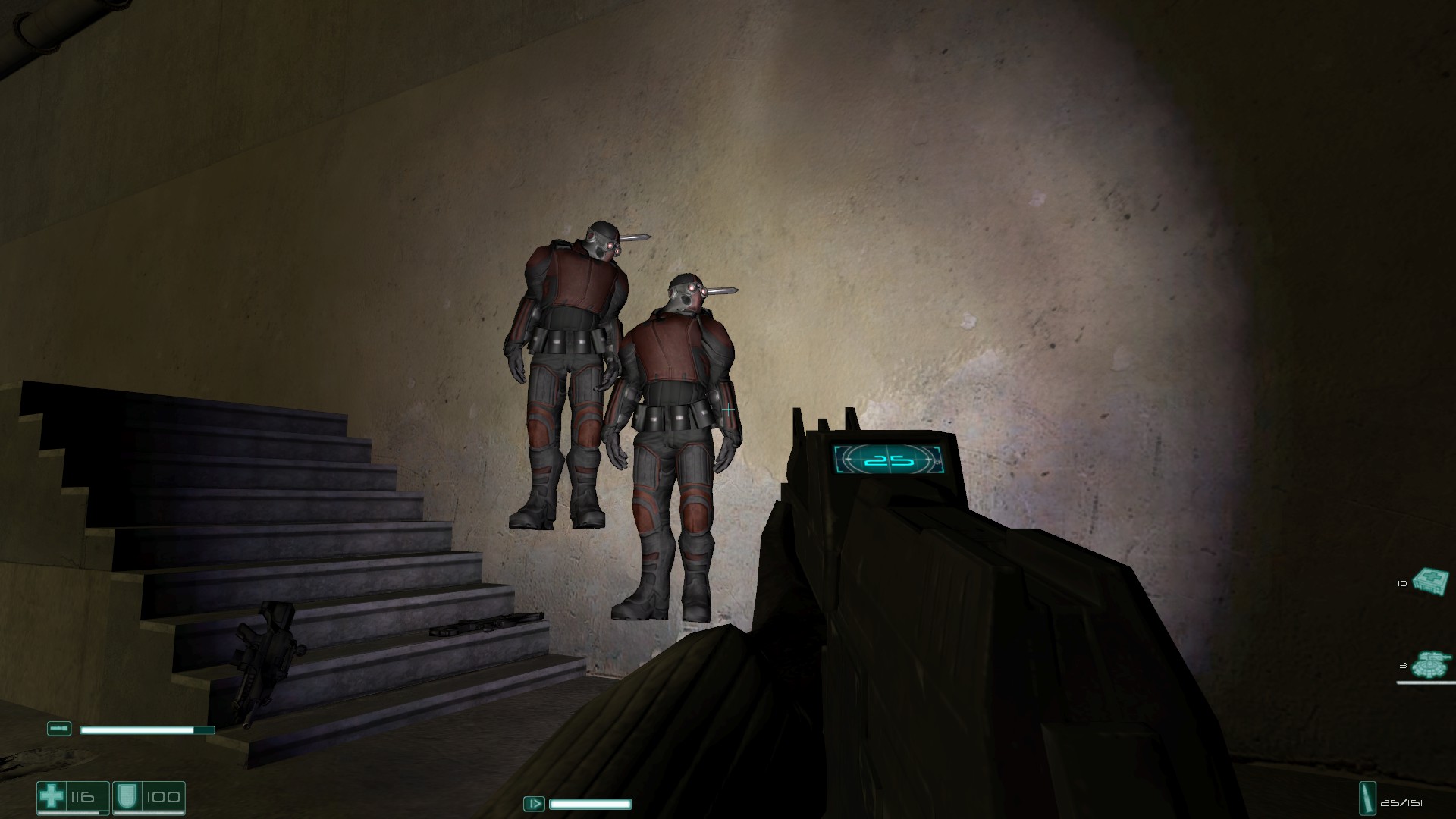 Or this guy... that looks really uncomfortable... 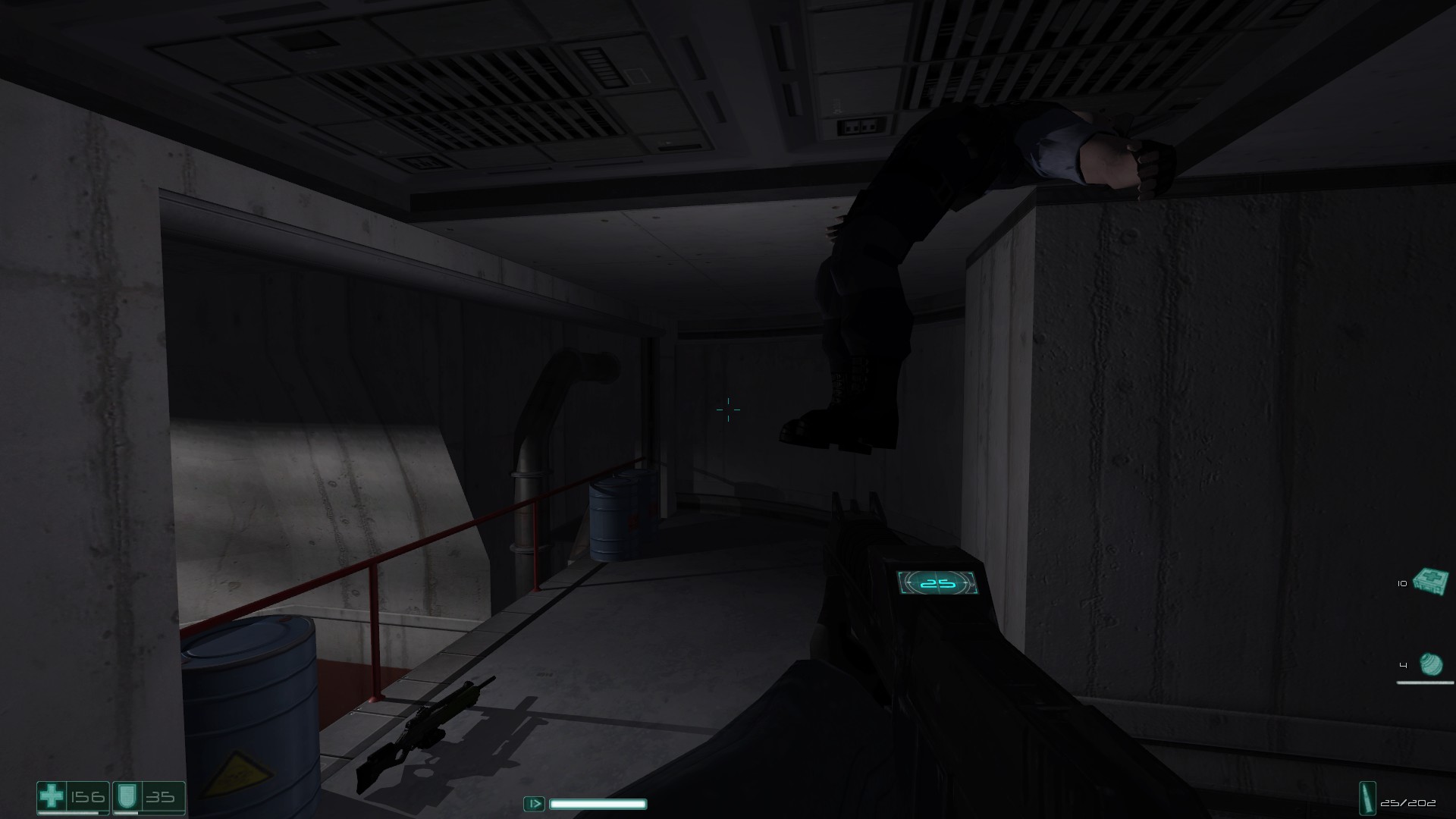 And this guy can't seem to get a handle on what happened to his friend... 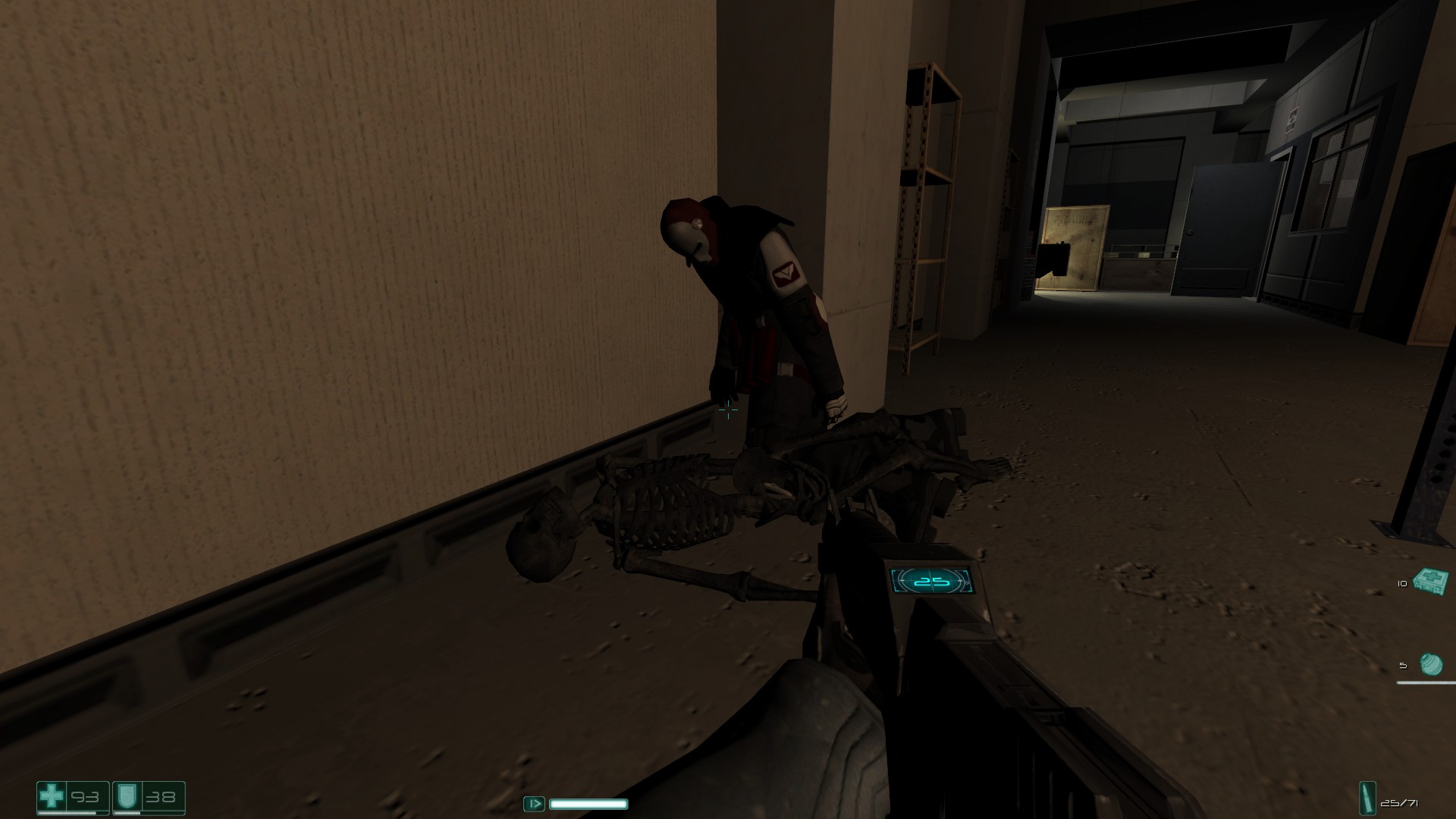 by Isgrimnur
Opus Magnum is "complete", as I have finished the story. I will not be trying to build molecules in small boxes to explore the appendix series of puzzles.

The reviews I read prior to downloading from Gamepass pretty much nail it: if you like Two Point Hospital, and didn’t get enough, you’ll like this.

Very much MOTS, with some nice UI tweaks. The specific gameplay and UI improvements are subtle, but when taken as a whole are really nice if you’re someone that put many hours into Hospital.

I think there are only a very few games where I’m totally fine with ‘MOTS, but with slight visual, UI, gameplay tweaks’ and this is one of them.

If they gave Civ V the MOTS treatment, I would be thrilled. Same for Defense Grid games (which they did) and Kingdom Rush (also mostly did).